ABR is a unique therapy which rebuilds the strength, structure and function of the body. 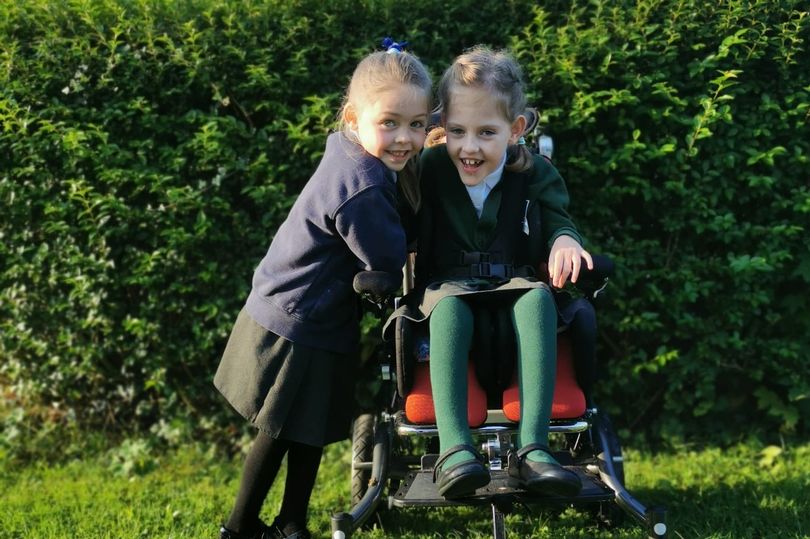 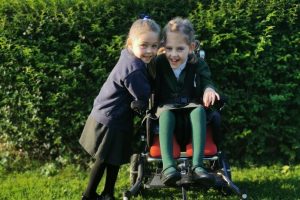 Aoibheann (right) with one of her younger sisters

A Glengormley mum has spoken of the treatment that’s giving her young daughter more freedom.

Aoibheann O’Connor, who turns eight next week, was born prematurely at 28 weeks and developed hydrocephalus and cerebral palsy due to a brain hemorrhage shortly after birth.

She was previously unable to sit or walk unaided as a toddler, but now, thanks to treatment she has been going through for the past five years, Aoibheann’s quality of life has improved massively.

Speaking to Belfast Live, her mum Aisling, 39, said the positive changes over the past few years have been “shocking.”

She added: “At the start, I thought it was all about being able to walk and that was the goal, but now I’ve realised that wasn’t the goal at all – it was actually the quality of life that Aoibheann has.

“Before, she couldn’t look over her shoulder, she would have to move her whole body then she would be put off balance. Now she’s able to look around, and call whoever’s behind her. It’s all those little things that make you realise this is what it was all about. 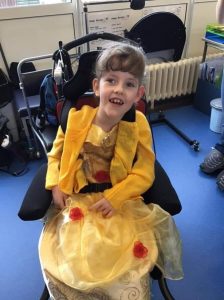 Aoibheann dressed as Belle from her favourite movie, Beauty and the Beast

“The quality of her body has improved so much in the past five years, we didn’t even realise it was as bad as it was.”

The therapy, developed in 2000, is a unique rehabilitative approach for children and young adults with cerebral palsy and other brain injuries that brings about structural correction of musculoskeletal deformities.

A year ago, for the first time ever, Aoibheann began singing along to her favourite film, Beauty and the Beast, with this being a sign of how far she has come on since her ABR treatment began at the age of three.

“She had never sang before that”, said mum-of-three Aisling.

“We were talking to the ones from ABR and they said because of the work you’re doing around her chest, it improves the muscle quality around the ribs, so she’s able to expand her lung capacity more to take in the air needed to sing.

“Before treatment she used to talk but would start to trail off as she got to the end. It was like ‘has she run out of air?’ – the words kind of disappeared. 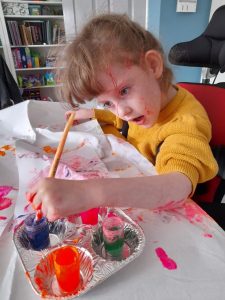 Aoibheann working away on some art

“She loves Beauty and the Beast more than anything else in the world, and now she sings it at the top of her voice, you can hear her at the other side of the house. It just makes you think that this is what it was all about.

“Aoibheann also loves art – she tells everyone she’s an artist and is all excited about that for her birthday.”

Now, the family are continuing their fundraising so Aoibheann can continue her treatment, which costs around £5,500 per year.

Aisling added that it’s “intensive” and designed to be a “life-long commitment.”

The 39-year-old continued: “Her daddy and my sister do two hours therapy with her five days a week. She comes home from school, then it goes from 4 to 6. It’s not like physio, she would just lie down and watch cartoons while they do it to her which means it’s a lot more relaxing than physio. You’re not torturing her with exercises she can’t do.”

Aisling is hoping to raise awareness of ABR therapy, as she said it was a treatment they “stumbled upon” but that it has made such a difference to Aoibheann’s life.

She said: “I was looking for other treatments as I couldn’t do physio with her anymore, it was just cruel. I found ABR and if another family found it, it would be great, as it makes such a difference in kids’ lives.”

So far, the family have raised £39,000 over a number of years thanks to support from the local community, but they’re hoping for more backing to continue Aoibheann’s treatment.